Alright, y'all, the boys are back and they're coming out swinging! Joe, Mark and Nik are covering the whole gamut this time around; the Occupy movement, Frank Miller's fall from grace, the economy, the climate of politics, the popular obsession with cell phone pics and even trends in mainstream rap! There are no punches pulled and no quarter given this episode! Also, we have the debut of a new installment for the show, "BEEF w/ Sanjay". So come on down and hear the fire fly! They break the 2-hour mark on this one, so trust me, there's plenty to hear. And remember, folks, this is an 18+ adult counter culture podcast, so if you ain't over 18, you shouldn't be listening to it!

Podcast Powered By Podbean
Download this episode (right click and save)
Posted by Imaginos Workshop at 11:43 AM 0 comments

Tools Of The Trade Part 2

Last time we talked I mentioned a tool called Celtx. Celtx is a script writing software that is free to download and use, but also allows networking features so that your and your collaborators can work together on the same script, for a nominal subscription fee. 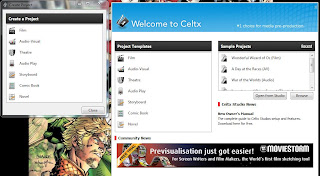 In lieu of the subscription fee service provided by Celtx, we here at Imaginos Workshop, opt to use Dropbox, the file archieving and sharing software I spoke about in the last T.O.T.T post. Dropbox and Celtx allowed Nik, who is currently in Chicago, and myself to finish revisions on act one of a script we have most recently been working on.

One of the coolest things about Celtx is that not only is it formatted for film,play and a number of other types of scripts, outlines and screenplays it also has a very competent COMIC BOOK script format. 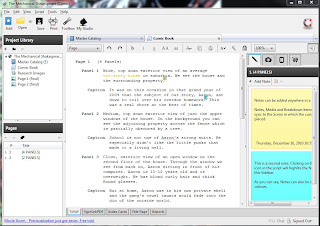 This is a boon for comic writers in that I haven't seen to many other softwares that do as good a job at tackling this format as Celtx does. It allows you to choose and place dialog, pick the type of word balloons and captions and much more.

If you want to give Celtx a try you can download it here.

There is also a cript writing book that I have got to talk about. The first is the J. Michael Straczynski's


THE COMPLETE BOOK OF SCRIPT WRITING! 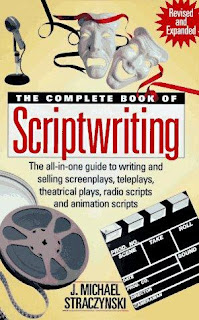 This book goes in depth, not only concerning the script writing process but also gives a huge amount of insight concerning the business aspect of film, television and animation.

Next I will talk a bit more script writing books and later about digital  imaging and painting tools like Photoshop, Sketchbook Pro and Corel Painter as well as some really cool Japanese image softwares such as Paint Tool Sai and Manga Studio.

Mark
Posted by Imaginos Workshop at 11:34 AM 2 comments

What got me thinking about that was the fact one of our favorite novels here at Imaginos is "The Strain" trilogy by Guillermo Del Toro and Chuck Hogan and that series has been adapted as a comic book series by Dark Horse Comics with David Lapham as the writer and Mike Huddleston as the artist. Now we are certainly hopeful that the series is going to faithful to the series, especially considering Guillermo Del Toro is involved in its production, but some early promotional artwork made us a bit weary of it. Now thinking about that, I realized that there's a ton of scrutiny that adaptations are put under as a result of them being developed from established properties and thus come with an established audience on top of the new audience they're striving to appeal to.

Now, there are numerous people that would consider adapting an established property as "taking the easy route" in terms of creative development but I think that there's a great deal of difficulty involved with taking a property established in one medium and adapting it for a different medium. And while I prefer making my own properties and developing those, but I can still understand the desire to expand a property beyond it's established medium.

Now, don't misunderstand, I'm not saying that there aren't any bad adaptations; god knows that there are likely WAY more bad ones than good ones. But, I will say that I believe that when it's done well, there should be at least some kudos for it, 'cuz it's not an easy task in the least.

-Joe
Posted by Imaginos Workshop at 9:22 AM 0 comments