As you probably know, we have recently been promoting our Kickstarter bid as a way to help fund our comic book Imaginos Plus. As of last week however we have decided to cancel our Kickstarter bid for now. We were not on track to meet our financial goal, and we decided to postpone the crowd-sourcing project so we could retool our proposal, as well as continue working on our project. Just because we have postponed our Kickstarter bid does not mean we've stopped working on the project itself. On the contrary, we are working harder than ever on our comic book and the artwork is coming along great. While we're disappointed that our first Kickstarter bid didn't make it, we feel confident in our work and we will definitely try again in the future. In the meantime, we keep working.

Thank you so much to those of you who donated and shared our project while we were promoting it. You people are amazing, and we're going to need your encouragement and support while we keep doing our thing. The cool thing about Kickstarter is all the money is automatically returned - so nobody lost anything except a little bit of time and effort. We are sincerely grateful for those of you that showed your belief in us and our work. Stay tuned, because we haven't slowed down and we haven't given up on crowd-sourcing our projects. Despite not making the goal, it was a great learning experience.

And just so you know, we are going to be at this year's Youmacon 2012 in Detroit! Look for our table there where we will be selling copies of The Door and showing off some of Mark's awesome artwork! The event is this Thursday-Sunday, Nov. 1-4. Find out more info at their official site. Thank you, hopefully we will see you there.

Jon
Posted by Imaginos Workshop at 11:51 AM 0 comments

Alright, folks, we're back again for another round of hilarity with the boys at Imaginos Workshop! The sparks they are a flying as things with our kickstarter take center stage and we discuss upcoming plans for "Imaginos TV" and Youmacon, a rather deep discussion of comics, the election, "foodies" and, for some reason, the term "combies" actually has to be explained. It's an all kinds of special episode in the Hideout this time around. Join in on the fun!

Podcast Powered By Podbean
Download this episode (right click and save)
Posted by Imaginos Workshop at 3:44 PM 0 comments

Imaginos Plus: A 3-part Comic Adventure - And You Can Help

Everyone knows that Detroit has fallen on hard times. This is nothing new. It is and has been suffering from financial crisis, joblessness, urban dilapidation and political scandal. It has become something of a warning sign for a nation feeling the pangs of unemployment and political stalemate. Detroit has also become something else in the meantime: a symbol of pride for the entire state. There’s something about its working-class, damaged goods persona that appeals to a certain crowd. People in this country can’t help but root for the underdog. Young, college-educated people are actually moving into Detroit, and the city is experiencing something of a mini-Renaissance, even amidst some of its darkest hours. A product of this professional influx is an export that will be very important if Detroit is to come back: The Arts. Detroit has some very real and ongoing problems, just as it is experiencing a resurgence in cultural pride and artistic output.

Somewhere out of this imperfect love comes Imaginos Workshop, but one of many professional and artistic endeavors owing to the history and people of Michigan and the Detroit area. There’s nothing special about us except that we love comics and movies and just about anything that tells a story. Imaginos Workshop is just the name we decided to give ourselves when we decided we wanted to write movie scripts and produce comic books. We recently became a Limited Liability Company, and our first stab at a self-produced comic book, Imaginos Plus, is in the works (as you’ve probably read on here by now). It is three storylines in one – kind of ambitious for a first project, but we just really like these properties. 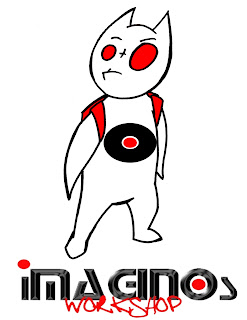 The first is called Requiem, and I can use the word “epic” here without feeling too hyperbolic. Joe and Mark have been crafting this storyline for a long time, and it has evolved accordingly. What we’ve written for Imaginos Plus is just the tip of a very big iceberg: they’ve written millions of years of bloody history for the multiverse that holds the story. Despite all this grandiosity, the story lives and dies by its character development, as a group of “black-bag” agents provide our key-hole into a mysterious and dangerous world. There’s almost too much to summarize here, but let’s just say it involves brutal action, multiple dimensions, the occult and corporate corruption.

The second property is the ridiculously-titled Candy Coated, a unique and truly spontaneous action adventure that employs an interesting writing style. The basis of the comic comes from Palladium Books’ Heroes Unlimited pen-and-paper RPG franchise. In case you haven’t reached the level of monumental geek that we have, RPG stands for role-playing-game, and it involves a group of people sitting around together using characters they created to explore a world that exists as dictated by their GM, or game-master. They use their imaginations to move through the world, and usually a set of books or rules to give shape and stats to the world and what they can do in it. Dungeons & Dragons is the most famous example of this, and only partly deserves the stigma it has gathered over the years. Candy Coated is written as it happened during these gaming sessions: it is truly spontaneous and organic. We “wrote” the story insofar that we experienced it in-game and responded to the events in Mark’s story with a disturbing lack of forward thinking. The story itself is about a group of damaged superheroes who mostly attempt to do good but almost always end up damaging things in the process. They are dysfunctional, confused and selfish, and their powers mostly the result of dangerously irresponsible experimentation that they don’t understand. This was a fun comic to play through, and we hope it’s just as fun to read.

The third and final property is called Juda Fist: 7 Deaths of the Yobi, and it is a story truly many years in the making. It is the brainchild of Mark Dudley, and it is a truly cool mix of genres. It is a sci-fi dystopian action-epic, with heavy doses of hip hop culture and blaxploitation, influenced by Hong Kong cinema and inspired by the books of Octavia Butler. It is stylish, dark and violent, and always gets a great reaction from people checking out Mark’s artwork. The story centers on a group of antihero mercenaries living one day at a time in futuristic Detroit. Their journey intertwines with an ancient conflict that threatens not just their lives but the fate of the solar system. 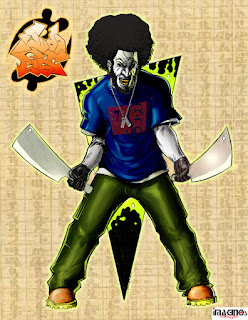 So there’s Imaginos Plus – and here comes the pitch. We have recently put the project up on the crowd-sourcing site Kickstarter in an attempt to get the thing funded. We are going to get the book done at some point either way, but if we could get some funds from Kickstarter it would happen a whole lot sooner and we could afford to pay the awesome inkers, artists and colorists that would help us finish the project. So if you feel so inclined, we would absolutely appreciate any contribution you could make to our book. We also really appreciate you telling others about the project: friends, family and fans sharing the project are the only way we’ll reach our goal. Thanks to all of you that have supported us and worked with us. Hopefully we can reward you with some cool stories and art in the future. We’re enjoying the process.

Author's Note: As of October 2012 we were unable to reach our monetary goal for our Kickstarter project. While this is disappointing, it does not mean that we've stopped working on our projects. Work on the comic book and scripts continues just as before, and we look forward to showing you more and more and trying again with crowd-sourcing in the future. A sincere and heart-felt thank you to everyone who donated to our project - your encouragement and donations help keep us creating.

"READ ME OR ELSE!!!" - the shameless attention grabbing title
Hey Everyone,


We’re almost two weeks into our Kickstarter campaign for the Imaginos Plus Comic Sampler.  So far I’d say that this process has been exciting and maddening but more importantly its fun.  Seriously, it is.  Mark would have a slightly different opinion because he’s our only artist and while he loves the actual art portion his perspective is naturally going to be different compared to mine or Joe or Jon’s.


I imagine that having your artwork evaluated is deeply personal because for this particular project that is the first thing everyone notices.  George Clooney had an interesting comment regarding actors and the process of auditioning, where people are evaluating ‘You’ directly so it’s impossible to not take their critique personally.  I agree with that because as writers and creators the rest of us sometimes feel that sting when a person hears your idea and goes “Meh, its OK” or “Nah, not really interested in that, but good luck though”.


Our marketing campaign has been pretty comprehensive considering the various outlets and media we’ve been utilizing.  I’ve personally taken to pestering my friends and family into supporting our Kickstarter project either by pledging or by spreading the word.  Is it shameless?  Nah not really.  Am I capable of shame?  Even better question, but the same answer applies.  So far the support has been pretty steady and with just over a month to go we expect things to pick up.


In the coming days you’re all going to see some pretty nice ‘Behind the Scenes’ material – especially what it’s like to work on these projects and with each other.  We chose to try our hand at Kickstarter because it was our chance to see how well we could organize and carry out the process of producing an actual comic book.  Yeah I could probably draw a bunch of stick figures and staple the pages together but that’d just be sinning against nature.


I’d like to invite everyone to listen for our next podcast on the ‘Honeycomb Hideout’ where you’ll get an idea of what its like inside the ‘Workshop’ – those of you who have listened to the show can vouch for the entertainment value once you put aside the egregious rips and merciless hate that we fling at each other.  We’ve posted a video update on our Kickstarter page and stay tuned for a few more so you can follow our progress.  My idea to use third world child labor was voted down by the guys, bless their hearts and for that reason we won’t have to do much creative editing for our upcoming video updates.


Seriously though, thank you to everyone who is supporting us and have pledged to our Kickstarter project thus far.  Outside of our own personal joy in working on the project, your support and the desire to have you all enjoy it is of great motivation for us.  Please keep up the support and hang on for the ride.....or else :)