At one point Michigan (and hopefully again soon) was an incredibly fertile ground for the film industry. Between the various films and television series that have been filmed here, the metro Detroit area has been getting a lot of great exposure, and a film was just released by a local talent that might help increase it even more.

Pawn, written by Michigan-born writer and friend of Imaginos Workshop Jay Anthony White, is a suspenseful crime drama centering on a diner robbery that escalates into an intense hostage situation. With an involving plot and an impressive list of stars (Forest Whitaker, Ray Liotta and Michael Chiklis, who also produced the film), the film definitely sneaks up on you in surprising ways. 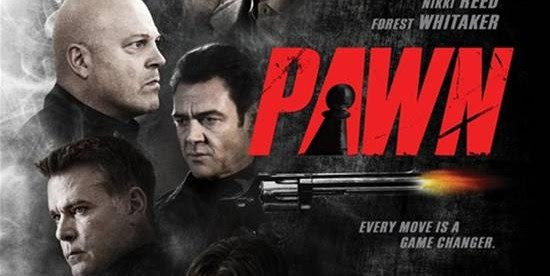 The plot is very involving and filled with interesting story-telling techniques to both establish the world and keep the audience on their toes. As is necessary from any suspense drama, there are plot twists and turns throughout the film that will keep you guessing for the majority of it. But there is also a relatable quality to the plot that will make you wonder what you would do in the given situation.

As it was the actual Red Carpet Premiere myself and Mark were able to attend at the Royal Oak Emagine theater, there were numerous local talents in attendance, as well as news coverage. It was a new experience for me and Mark, but a good one, as it was obvious that making sure this film got a Detroit premiere was very important to everyone involved.

Pawn was most definitely an entertaining film and it was also a great bonus to have been written by a local talent, so I was happy to be able to support it. As entertaining as it was, I got the impression that it didn't get a very wide release, so I’m anxious to see how it will do on DVD (because of the nature of the film, I predict it will do VERY well). If you get the chance, whether it be in theaters or on DVD, give Pawn a viewing. If you are a fan of crime dramas/thrillers, I don’t think you’ll be disappointed.

Alright, 'Combies! Your patience has paid off! Here's part 2 of Imaginos Workshop's  examination of the dark side of counter culture, this time looking at the ethnic issues and politics within it. Joined by our guest Tobi Ogunyemi, founder of Multimedia Pop-Culture site "SpaceLion", the gang examine how ethnicity comes to play in the various aspects of comics, films, cosplay and even from the production standpoint. Get ready for some major deep (and always humorous) conversation and debate!


Podcast Powered By Podbean
Download this episode (right click and save)
Posted by Imaginos Workshop at 1:07 PM 0 comments

Between all the RPG and Comic artwork I have been working on. I have had a chance to actually get a little bit more done. In the last 24 hours I have managed to get a Guerilla Style Interview and Promo video edited for our fledgling Youtube Channel IMAGINOS TV.

Now this stuff is kinda rough in that we had limited technology when we did it. Our tech is a lot better now, so we should be able to really have some cleaner, prettier stuff for you later. I would like to give a huge thank you to everyone who participated. IMAGINOS WORKSHOP continues to refine and define itself and this could not be possible without you guys.

Posted by Imaginos Workshop at 12:28 AM 0 comments