Summer movie preview: 5 under the radar films to watch for

The days are getting longer. Memorial Day has come and gone, beaches are open and school will be out soon for the summer months. Although summer doesn’t technically begin until June 20, it is already summer in many peoples’ minds. For the movie industry this means it’s time to release the biggest movies of the year. The Avengers has already gotten the ball rolling with a record-setting spring release, and there are some huge films on the horizon that studios (and theaters) are hoping will get people off the beach and into the cinema.

You will hear plenty of talk about Ridley Scott’s sci-fi epic Prometheus which appears to be a spiritual successor (prequel?) to the Alien series. Then there’s Pixar’s Brave, which features a roguish red-headed heroine (a first for Pixar) that people will see no matter what the trailer looks like because, well, it’s Pixar. And of course Christopher Nolan’s Batman trilogy will come to a conclusion in what is undoubtedly the summer’s most highly anticipated film – The Dark Knight Rises.

But what about the rest of the lineup? I could give you a list of my most anticipated summer films but my guess is that you don’t need me to convince you to go see The Dark Knight Rises. So instead I’ve put together a list of a few promising movies that are getting far fewer headlines than the big dogs. This doesn’t mean that they’re necessarily small movies (although a couple are) but my guess is that you’ve heard far less about them than the sequels and superhero movies. Here are my Top 5 under the radar films of the summer season.


Editor's note: If the full screen option is not working for the trailer videos and you would like to enlarge them, I would recommend clicking on the title of the video above it in white letters. It will open the video in a new tab on the YouTube website.

One of the few horror releases this summer, The Pact is director Nicholas McCarthy’s feature length debut. The movie itself is based on his short film of the same name that debuted at Sundance in 2011. It is about a woman (Caity Lotz) who stays at her childhood home after attending her mother’s funeral, only to sense a mysterious presence in the house. The short was well received at the film festival, and early reviews of the full length version are positive, praising its eerie atmosphere and suspenseful pacing. So much of horror films’ success lies in execution; here’s hoping that The Pact is able to deliver.

Something From Nothing: The Art of Rap   Release Date: June 15

Legendary rap icon Ice-T is the director and interviewer in this ambitious documentary that debuted at this year’s Sundance Film Festival. The film explores the prodigious rap game: the music, the inspiration, the history and the characters of a music that is much more than just a genre. It features a ridiculous list of artists and interviewees including Snoop Dogg, Dr. Dre, Afrika Mambaataa, Grandmaster Caz, Mos Def, Ice Cube, Chuck D., Common, Kanye West, Q-Tip and Rakim (to name just a few). Based on the trailer it’s hard to discern exactly what the mission of the documentary is but at the very least it looks to be a fascinating and funny journey into the history and ambitions of a type of “folk music” that has evolved into a movement.

After Woody Allen’s Oscar-nominated Midnight in Paris last year, Allen turns his unique cinematic eye to Rome in a movie that appears to be comfortably in the auteur’s wheelhouse. A large eclectic cast, snappy dialogue and luxurious shots of Rome’s sun-warmed streets will perhaps do for Italy what Midnight in Paris did for France, although there are no implications of magical twists of fate this time around. Allen himself returns as a character among a cast that includes Jesse Eisenberg, Alec Baldwin, Penelope Cruz, Ellen Paige and Roberto Benigni. If Allen can keep ahead of his formidable (and sometimes misdirected) intellect this film should be a pleasant alternative to the summer’s heavier hits.

Director Oliver Stone’s latest movie looks more like Natural Born Killers than anything he’s released in over a decade. It eschews the political trappings of much of his filmography in exchange for Mexican drug cartels and high octane violence. There is a love triangle that includes Blake Lively, a federal agent played by John Travolta and some drug-dealing baddies in Salma Hayek and Benicio Del Toro. It’s nothing too intellectual, but if Stone can make us care about these characters then the guns, drugs and explosions should do the rest.

This globetrotting drama is directed by Brazilian director Fernando Meirelles who directed City of God (that alone is enough for me to watch it) and written by Peter Morgan (Frost/Nixon, The Last King of Scotland). It weaves together the storylines of various characters across several continents while examining the dynamics of social and sexual relationships and how they shape our lives. It debuted at the Toronto Film Festival to mixed reviews, with some complaints that the connections between its characters were too tenuous but drawing praise for the breathtaking cinematography that has become director Meirelles’ trademark. It stars Rachel Weisz, Jude Law, Ben Foster and Anthony Hopkins. For some reason I wasn’t able to find an American trailer online so I’ve put up a Thai version. Sorry about the poor quality.

Email ThisBlogThis!Share to TwitterShare to FacebookShare to Pinterest
Labels: 360, Fernando Meirelles, film, Hip hop, Hollywood, Ice-T, movies, preview, Savages, Something From Nothing: The Art of Rap, summer, The Dark Knight Rises, The Pact, To Rome With Love, trailers, Woody Allen

Last week Detroit Tradecraft's Mike Marcus was interviewed by Huffpost Detroit. The article talks about the Motor City Comic Con (wrapping up today in the D) as well as the pros and cons of producing independent comics. He also gives a shout-out to other local artists (such as Pat Jackson and Mark Dudley of Detroit Tradecraft). Read the article here.

Posted by Imaginos Workshop at 10:41 AM 0 comments

This past weekend I attended the Chicago Comic and Entertainment Expo as a writer for Imaginos Workshop. We had a table there in Artist Alley where we were promoting our upcoming comic book sampler with posters, stickers and business cards. We also were selling Issues 1 and 2 of Detroit Tradecraft’s The Door. It was a jam-packed and exhausting weekend, and a valuable experience for our upstart company. We had the benefit of sitting between some great artists. On one hand we talked to Jeff Delgado of Dream Gear Studios, who does prints, t-shirts, tattoo design and commissions. On the other side of our table was Carlos Gabriel Ruiz, with a group of artists and illustrators from the St. Louis region.

The most striking and immediate impression of a comic convention is the people attending it. People-watching is at a premium at a con, which attracts a vast number of people that come in many shapes and sizes. The easiest response (especially for a “normal,” or someone not used to the culture of the con) is mockery: the con environment is ripe for satire, or at least good-natured ribbing. You will see people dressed in costumes, capes and tights. It’s no secret that a con is a circus of nerds, geeks and freaks. Even such terms are necessarily alienating, applied to a type of person that has been classified as fringe. But the real reason one is at first drawn to mock conventioneers is not the get-ups or the bad fashion: it is the bald-faced sincerity. There is a certain high school mentality in ridiculing earnestness, and there is nothing more earnest than a bald 42 year-old proudly sporting an R2D2 shirt. But once the initial shock wears off from seeing an auditorium full of unabashedly nerdy adults reveling in comic book culture, it’s hard not to enjoy yourself. 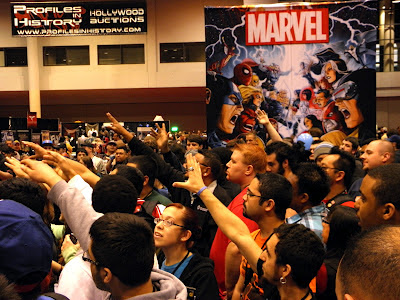 There was a slew of celebrities and sub-celebrities there with ties to geek culture and probably something to promote as well. I got an autograph and an awesome picture with Tom Morello from Rage Against the Machine. Later he did a Q&A session in which he talked about his comic book epic Orchid and how collaborating on a comic is different from playing in a band. He talked about his career in the Los Angeles music scene as well as the future of the music industry. In response to a question regarding downloading music, he said that it was hard to support giant record labels that sue kids for downloading music when the companies produce CD’s for ¢4 and sell them for $18.99. Morello: the music industry as we know it may be on its way out, “and that may not be a bad thing.” Later in the session he encouraged people to listen to a certain Nightwatchmen song but insisted: “This isn’t a plug. Go download it illegally or something.” He also answered a variety of geek-influenced questions such as what his least favorite comic book-to-movie adaptation is (Watchmen. His favorite? Iron Man). Incidentally, Morello is credited on IMDb as playing a guard in Iron Man. And when asked about the state of Rage Against the Machine Morello answered somewhat exasperatedly that there is no state of the band: “Go tell your friends so they can stop asking me. If we do anything we will tell you. We’re not hiding from you.” 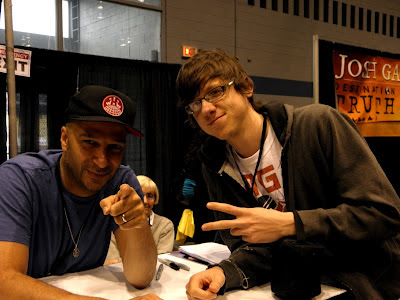 Shia Labeouf made an impromptu visit to the convention promoting his book of self-styled art and observations. It exists somewhere between a memoir and a comic book, and people seemed to be buying them at a quick pace for $10 apiece. I didn’t buy his book but I did get a picture and ask him a question. It went like this:

JR: You were a voice in Nausicaä [of the Valley of the Wind].
Labeouf: Yes.
JR: Did you meet [Hayao] Miyazaki?
Labeouf: I met Miyazaki for a total of 15 minutes. I basically did the movie for him. I view him like you do [as a fan].
JR: Did you go fanboy on him?
Labeouf: I totally did. I’ve only ever really freaked out when meeting someone a couple times. Miyazaki…and Kramer, strangely enough. Them and Dustin Hoffman.

For those who don’t know, Hayao Miyazaki is a Japanese director with a slew of critically claimed animated movies (Spirited Away, Howl’s Moving Castle, etc.). He is an unparalleled auteur and demigod in the cinematic world.

It was a short exchange but Shia was visibly excited to talk about a cinematic idol and I appreciated his enthusiasm. He struck me as surprisingly grounded for someone that’s really gotten a heavy dose of celebrity in the past several years. When my friend Alexa introduced herself to him she shook his hand and said, “Hi, I’m alexa.” He responded, “Hi, I’m Shia.”

There’s something refreshing about a mass of people sincerely reveling in a common bond. It has the feel of a community of sorts, a hodgepodge of personalities that probably wouldn’t look twice at each other on the street. Like a concert or a sporting event, a convention is a state of mind, where you are united with complete strangers with a common and undying bond. It is also the only place where you can rub shoulders with Catwoman, Dr. Doom, Pikachu and Captain America in a matter of minutes. C2E2 was an exhausting parade of artists, onlookers and superheroes that more than once put me into a peculiar and satisfied daze. It was only the second comic convention I’ve ever attended but I hope there will be many more in the future.