Hey Studio Execs?  What is the obsession with cramming your hopeful blockbusters into the summer months and the Thanksgiving/Christmas corridor?  Why forfeit almost eight months of earning in a calendar year?  One theory I have is the Unhappy Triad.


The days of the double and triple feature at the movie theater are all but extinct these days.  One major reason is the pricing of the tickets and the concessions.  Yes I know Monday thru Thursday the tickets are cheaper but most normal people go to the movies during the Friday to Sunday period.  And no moviegoer is required to buy concessions but that takes away an iconic joy from the movie experience.  That would be like having no beer during St. Patrick’s Day or no turkey during Thanksgiving.   Yeah I’m sure the St. Patrick’s Day festivities would be just as awesome without the beer.


Moviegoers have tried to adjust to these outlandish price hikes by selecting more matinee times and sneaking in concessions from outside.  However we may soon get to the point (if not already) where it won’t be worth it to go to the theater even for the blockbuster movies.  Here’s some simple yet depressing math using opening night of one of the most anticipated films of the year, the Avengers.

The standard movie outing involves buying a ticket with some popcorn and a drink which would run you at least twenty four dollars.  God forbid if you take a date to a movie or take the kids to the next big animation movie because those almost have to be seen in 3D these days.   People are going to flock in even bigger mobs towards Netflix or other providers and simply try to poorly recreate the theater experience at home.  For me part of the joy of the overall movie experience was sharing the thrills with the audience crowd.  Some of that will be on full display during the opening weekend and midnight shows of the Avengers this summer.


While pricing threatens to totally derail the joy of the movies, the scheduling is also a problem.  Blockbusters only come out during May, June, July, mid November and December, the rest of the months are left out in the cold.  Moviegoers are subjected to Indy darlings, romantic comedies, and big budget productions undeserving of primetime dates.  When a big name movie is pushed into the January-April period or the September-October period that’s usually a giant warning sign.  And history has proven this fact out.  Here’s a weird idea though, why not just space out the blockbusters throughout the year so that they can maximize their earning potential and moviegoers won’t be subjected to months of terribly lackluster flicks?  If Avengers came out in the middle of February (and provided it didn’t suck) fans would be confused but they wouldn’t care.  The Avengers would crush the competition for at least two months if not longer.


The super blockbusters try to space themselves out by claiming one month in the summer while all the other movies hope to live off the scraps in between them.  It is a crazy practice that moves further away from logic as time goes on.  Yes, during the summer kids are out of school and they should be able to go to the movies more frequently but that’s not the case anymore.   The shareholders of the major studios don’t care when the money is earned as long as the final tally is good at the end of the year earnings report.  During those empty months if moviegoers had a reason to go to a movie they may find the patience to stomach those insane prices for an enjoyable night at the theater.
- Nik
Posted by Imaginos Workshop at 4:06 PM 1 comments

The Importance of Influence: The Moving Pictures

I’m going to take my queue from Mark while I still can and take a minute to talk about what inspires me as a writer and as a person. After all I’ll be damned if I miss out on the chance for some good old-fashioned navel-gazing.

It’s impossible to identify everything that inspires and moves me as an individual, but in the context of The Arts and content creation, my inspiration is the cinema. I realize that this is a fairly broad term so let me explain more exactly what I mean by that.

I am not talking about the studios, the money, the politics or any of the other necessary if cumbersome machinations of the movie industry. Nor am I talking about celebrity worship or the box office, although I am interested in these things on a different level.

I am talking about the byproduct of all those things, the much less tangible moment in a film that moves me to an emotional reaction that sticks around long after the credits have rolled. These moments are lasting and memorable. They get a hold on me (not the other way around) and by way of some mysterious alchemy they become part of who I am.

The Moment is something that comes together against all odds, when film writing, editing, cinematography, direction, acting and sound come together in a moment that transcends the increasingly cynical business of movie making and reaches at some higher truth. It is mise-en-scène at its most successful and effective. I am not overstating this: I believe movies can make you a better person, and it happens in moments like these.

And I’m not just talking about the good old days. You don’t have to go back to the era of Grace Kelly and James Stewart, although you can find it there too. The unlikely and transcendent moments of cinema history are still being made today, and don’t trust anyone that tells you otherwise.

Take 2011, for example. There is a sequence in Nicolas Winding Refn’s neo-noir Drive that comes together in such a way. It is a quiet moment in an often ultraviolent film when Ryan Gosling’s cool and impenetrable character spends a day with his neighbor (Carrie Mulligan) and her young son. As they return to the apartment complex Gosling carries the young boy who sleeps on his shoulder. The film speed slows down and the boy’s arm swings like a pendulum across Gosling’s shiny embroidered jacket. Mulligan, walking behind them smiles in a way you suspect she hasn’t done in a while. It is a moment that means little in the broad scheme of things but it is shot, framed and edited to near-perfection. College’s track “A Real Hero” pounds on the soundtrack and asserts dreamily that “You have proved to be, a real human being, and a real hero.” 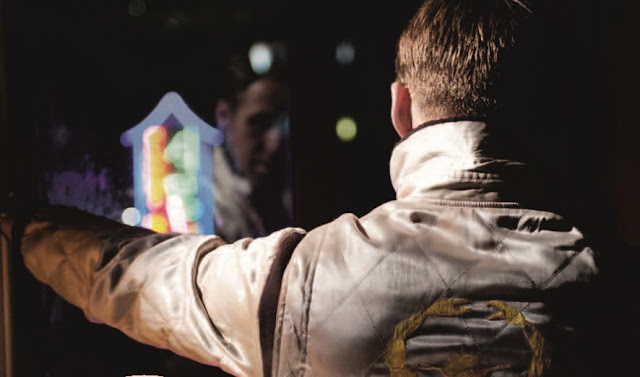 The sequence is fleeting and audiences talking about the movie certainly won’t mention it later. But it stuck with me as a moment which said more to me about the film and its characters than the scenes of jarring violence that occurred after. It was a moment that made me think, even in the dark of the theater: this is what other movies try to do. I had that same feeling watching The Coen bros. No Country for Old Men in 2007, and again in 2008 with The Dark Knight.

Moments such as these are why filmmakers make films, and why we watch them. They succeed because and in spite of the messy business of film production and remarkably, unexpectedly: an emotional truth is found. It explains why a true story need not be one that actually happened. Because in this medium, story is king. And in that context fiction can ring true, and maybe even tell us something about ourselves.

The Process: Creating a Comic Book Page. Part One.

Here is a video outlining the process of actually putting together a comic book page. This is purely from a pencilling perspective. I hope it is informative. Look out for part 2, I will show the finished pencils, and maybe some intro inking work. .

Posted by Imaginos Workshop at 10:25 AM 0 comments

I had been debating overtime with various colleagues about the real costs of piracy in the anime community.
I theorized that the Japanese were not, themselves taking as major a hit as were the American resellers like ADV and Funimation.

I have recently read 2 parts of a 3 part expose on the costs of creating an anime on Anime News Network.
I have to say that they have been nothing short of interesting, so far, and confirmed a lot of what I thought was the case through logical understanding of business practices.

I usually don't repost articles on this blog but since they are oriented toward the crowd we speak to anyway, her ya go.