The Imaginos Double Feature (Spoiler-Free Movie Reviews): "This is the End" and "R.I.P.D."

Alright, gang! The summer movie season has born fruit and we're gonna let you know just how they taste! (Hey, the analogy sounded like it worked in my head, so I'm going with it.)

"This Is The End" 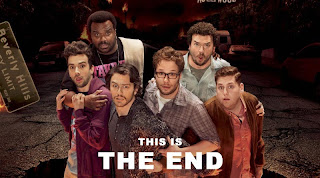 With the entire cast playing exaggeratedly douchey versions of themselves, the film follows Seth Rogen, Jay Barouchel, James Franco, Craig Robinson, Jonah Hill and Danny McBride as the attempt to whether the apocalypse. Now, as yet another entry in the Apocalypse movie craze from last year, it'd be easy to write this one off. Not to mention that this film had nothing but hilarious trailers during its initial press hype, so that automatically makes a lot of us weary as that sometimes means that all of the funniest stuff was in the trailer. Surprisingly enough, that wasn't the case.

The film is surprisingly well written and it actually has a lot of surprises to its credit. The first 20 minutes of the film alone took me by surprise, despite knowing what the movie was about. And the number of cameos by other stars of the core cast's level and above took me by surprise as well; Aziz Ansari, David Krumholtz, Paul Rudd, Emma Watson, Michael Cera, Christopher Mintz-Plasse and Channing Tatum to name a few  and you all will likely be able to name even more after watching it (Emma Watson makes some interesting appearances and let's just say I'll never be able to look at Michael Cera the same way again after this).

It's pretty clear that everyone involved was pretty cool with each other outside of the film and that everyone was very enthusiastic about and while filming it. And in my opinion, it definitely adds to the fun of the film. I'd say that if you're a fan of any of the core cast in any fashion, this movie is definitely worth checking out. I laughed my ass off and "Oh shit!"-ed on more than a few occasions. This movie is definitely more than it seems and is worth at least one viewing. Hey, an 84% on Rotten Tomatoes must count for something, right?

P.S.: If you're Catholic or another form of Christian but can't deal with humor in relation to your beliefs, this movie might not be for you. Just a warning. 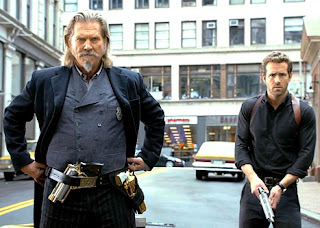 Now, this is definitely one of those movies that is exactly what you think it is. But the thing of it is, this movie's strengths don't lie in its premise (though it's definitely high-concept and cool in its execution), it's strengths lie in the characters.

Starring Ryan Reynolds, Jeff Bridges, Mary-Louise Parker and Kevin Bacon (he was a surprise for me because I never saw him in ANY of the trailers or promotions for this movie), the film centers of Reynolds and Bridges' characters (Reynolds playing a recently deceased cop and Bridges a sheriff that lived during the days of the Old West) who, in exchange for a little padding on their records when it comes time for their final "Judgement", agree to protect the world of the living from souls that slipped through the cracks. Now, there are the standard tropes to endure due to it being entrenched in the buddy-cup genre (but I'll avoid listing them off for the sake of "spoilers"), but all in all, they don't hurt the film as it makes fun of them as well.

While this film was based off of a Dark Horse comic series, I can't speak on how faithful it was because I never read the series (or heard of it, for that matter, but that's another topic for another time). But I will say that the movie was absolutely entertaining and I think that it was all thanks to the characters. And as a fan of high-concept films populated by interesting characters, I enjoyed a great deal more than I expected. "R.I.P.D." is definitely the kind of movie that fans of films like "Ghostbusters", "Men In Black" and buddy-cop comedies in general will love.

In June of this year, Ron Howard, Bryce Dallas Howard and Canon photography began accepting video submissions for the 2013 "Project Imagination" short film contest. Twenty finalists will be chosen on August 19, and in Fall of 2013 five winners will be screened at the Project Imaginat10n Film Festival. Imaginos Workshop's own Mark C. Dudley accepted the challenge and teamed up with local videographer Phil A. Brown and Wrapped Productions (along with Snook Tucker and John Miller, Jr.) to create Chances.

It is a stylish short film about a man's last day in prison, as he muses thoughtfully about life inside and outside the walls that confine him. A series of photographs, taped to the wall near his cot, transport him outside his spartan cell. His voiceover provides a poetic and esoteric narrative thread, along with a fresh hip hop soundtrack that permeates the nearly 10 minute film. The film also features an appearance by Mutare Ludum and Imaginos Workshop's Danielle Todd and April Cox.

Watch the official video submission Chances on the Canon Project Imagination website. "Likes" and comments help the visibility of the video, so please vote and leave feedback!

New entry in the Imaginos Workshop dictionary:
"Blackwash": An instance in which a fictional character that is traditionally portrayed by white person is portrayed by a black person in modern adaptations without actually changing or affecting the fundamentals of the characters.

Your patience has been rewarded! Here's the final piece to the "Counter Culture Shock" series... for now. This time the gang's coming together to discuss the generational-based issues inherent in counter culture, often ranging from hipster-style fandom-based elitism to flat-out infighting and geek bullying to unfortunate remakes and adaptations. I know, right?!

Joining the boys this time around is long-time 'Combie Kristina Neuville making her return to the 'Hideout and first-time 'Combie Imaginos Workshop art student/intern/gopher Joseph Young making his 'Hideout debut! This episode is a bit crazy as the gang jumped in face-first but you'll get the gist with some quickness. Come on down and see what shakes out but watch your head because it gets a little raucous. You know how we do.  ;)

Beware the great Milenko and his thunder-love!!  LMAO!!

Podcast Powered By Podbean
Download this episode (right click and save)
Posted by Imaginos Workshop at 6:01 PM 0 comments

Pacific Rim Brings The Pain......(Oh So Much Lovely Pain)

OK, myself and the Imaginos Gang went on an excursion to see Guillermo Del Torro's Mecha vs Kaiju romper-stomper Pacific Rim. As a student of Robert McKee, I found that the film did have its holes and certain pieces we could see a mile away. However, the film was very enjoyable. 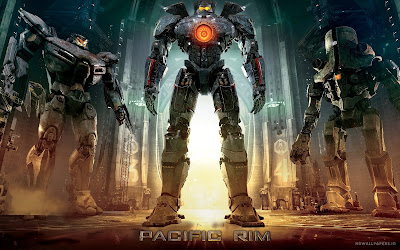 It managed to transport me back to the days of Ultraman, Giant Robo and the week-long Godzilla  and Gamera marathons, particularly the venerable Godzilla dust-up DESTROY ALL MONSTERS. Pacific Rim manages to keep the best of the Kaiju movie traits without giving in to the the foibles that plague the genre, such as hyper non-believability and camp. Though Del Torro decidedly based the Kaiju on the old men in rubber suits creatures of the genre, the 3D special effects more than create monsters that are scary and at times absolutely frightening. 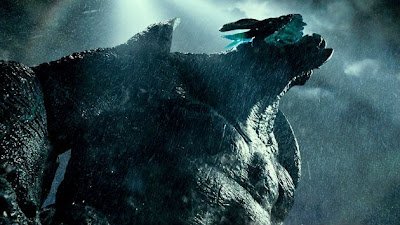 What I really loved about the film was the believable relationships between the various characters. The protagonists  Raleigh Becket (Charlie Hunnam) and Mako Mori (Rinko Kikuchi) are both scarred by traumatic incidents in their lives and over time grow sympathetically close because of it. There is a father and son team of Jaeger Pilots who we get to see grow through the adversity they face. The most compelling character is by far Marshall Stacker Pentecost, portrayed by Idris Elba. Behind his focus and hard as nails demeanor is a truly compassionate soldier who is willing to make the ultimate sacrifice to save his people. 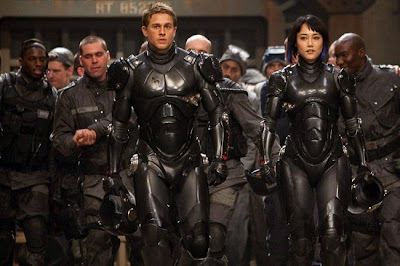 I can relate to Del Torro's needing to make this movie. He remained true to his (and my) childhood fascination with all things Kaiju and managed to create a film that makes me not feel so bad for still getting a little bit excited at seeing and loving new Kaiju movies like the Gamera: Gaurdian of the Universe series and Godzilla: Final Wars. Pacific Rim is a thrill ride and you feel truly happy for the protagonists when all is said and done. If you haven't seen it DO SO ASAP!!!