Honeycomb Hideout Episode 7: The "Other" Fandom 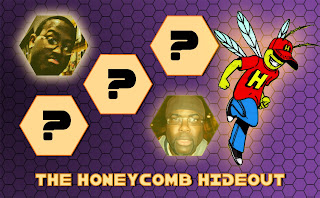 Guess what? We got the gang all here for this one and boy, is it a doozy!! Joe, Mark, Nik and Jon are joined once again by Jane Lane to talk about a fandom that, honestly, most wouldn't look at as a fandom but it's hard to deny that that's exactly what it is. That's right, today we're talking about Porn!! Or as some like to call it, pron, naughty vids and pics, or adult entertainment and ALL that that title entails. Like I said, it's a doozy, folks, and you won't believe just where it goes! Some come back down and join in on the fun!!

Podcast Powered By Podbean
Download this episode (right click and save)
Posted by Imaginos Workshop at 12:52 PM 1 comments 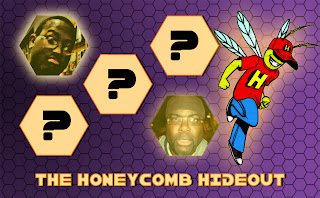 Well, here we go again! Mark, Nik and old Hideout veteran Jane Lane send the train right off the tracks this time around! Topics like comic and anime conventions are at the forefront with discussion on the conventions of conventions (for good and ill) as well Jane Lane's own... interestingly unconventional conventions are brought to the table. An exercise in self-contained chaos this one.

Oh, and for some context, here are links to the images that the gang talks about this episode.

And now you have context, whether you wanted it or not. LOL  Enjoy!!

Well, I'll be honest this is a post that's been long overdue.

As some of you may know, Mark, Nik and I were at Youmacon back in November to get some material and impression of the show for "The Honeycomb Hideout". For those that don't know it, Youmacon is Metro-Detroit's premier anime convention, truthfully it's likely one of the fastest growing anime conventions in the country. And as if the journey getting there wasn't interesting enough (just ask Mark and Nik LOL), actually being there was another thing entirely.

Now, this wasn't my first time being at Youmacon and it's always been a cool and interesting convention, but it was the first time that it was held at the Renaissance Center in downtown Detroit and I've gotta admit, it doesn't need to be anywhere else for this year. For those of you that have never been to an anime convention, they differ greatly from comic book conventions. There's an entirely different atmosphere that can't be denied; things are extremely loose (sometimes that also applies to the dress code for cosplayer's sake, it is an anime con after all), very friendly and pretty much bursting with enthusiasm.

We got the chance to talk to numerous attendees while we were there and, even though the day was winding down, the energy was still high. Not only that, but one of the coolest aspects of it is the kind of attention that it gives Detroit because there were anime fans from various parts of the country attending (exact locations elude me at the moment, but trust me, there were a lot) and all of them were shocked at how cool the city really was. They didn't believe the hype or buy the bad rap that Detroit always seems to get from the rest of the country.

Checking the Youmacon web page today, I see that they're having the show at the Renaissance Center again this year which is a great decision but they're also extending it to the Cobo Center as well. Kinda crazy but something tells me that they aren't going to have much difficulty filling both venues, considering that Youmacon's attendance in November actually beat out Detroit's Super Bowl attendance record. If that doesn't speak for it, I don't know what will.

Now, the interesting thing about meeting all of the different types at Youmacon, you could see the sprinklings of Sci-Fi and comic book fans in the crowds as well. This prompted me to inquire many attendees about whether or not they do read comics (american comic, not just manga, but I was surprised at the number of manga readers too, smaller than I thought it'd be) and I was a little surprised at how many actually did (that number was bigger than I thought it'd be).

Anyway, with the advent of conventions springing up that actually do blend the variety of fandoms in counter culture (Sci-Fi, Comics, Anime and Horror would be considered the figure heads), I'm curious to see how their numbers would stack up against Youmacon and other anime conventions. But surprisingly, certain other observations were brought to my attention as well and having been a convention-goer for over 15 years now, I'm shocked that I didn't realize it myself.

With comic book conventions, while there is an emphasis on fun (as there should be), there's also this sobering level of seriousness that tends to permeate comic con atmospheres. It's not a bad thing necessarily, but it's definitely different than what you'd find at an anime convention. I have a lot of fun at both, and personally, I don't quite see why the shows tend to be so different from each other. Some might say that it has to do with the significant age-gaps within the audience as well as the collector-centric nature of comics culture, but that's a discussion for another time.

Either way, with the wealth of conventions that the Metro-Detroit area has to offer throughout the year, there's plenty for everybody, ranging from Motor City Comic Con in the summer to Detroit Fanfare and Youmacon in the fall. So do yourself a favor and do a quick google search and find out when the next bit of fun kicks off! -Joe
Posted by Imaginos Workshop at 12:10 PM 0 comments

Tools Of The Trade Part 3

In previous posts I talked a bit about what tools we at Imaginos Workshop use to get the written part of our productions on track. Now I want to talk about some of the tools that help us to visual and produce or finished products. Besides working on scripts, we do illustration and comic book work. Thus we use a variety of different tools to help us out. For reasons, which i am sure you are aware off, and because you can get information on it just about anywhere, I won't go to indepth when I talk about Adobe Photoshop. 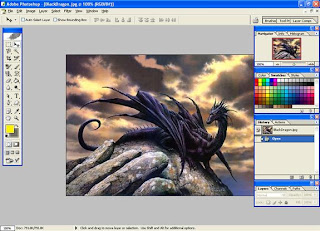 It is truly the workhorse of our pipeline. We use it to color images, create logos and even digitally sign documents. It is also an awesome photo manipulation tool. Another great tool which I use a lot for digital painting and touch up is Corel Painter 11. 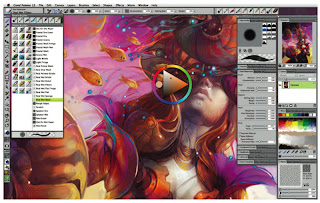 It has a lot of the same features as photoshop however, it has features that Photoshop is just starting to mimick. It has a natural feel to the painting and you can create tons of different media like conte crayon and watercolor work. As it name implies, this software is the best for painting images. It's interface takes a bit of getting used to, but if you have used Photoshop before you will get this in no time. The last software I am going to talk about is probably one of the best kept secrets out there for comic creators. It's called Manga Studio EX4.0 (or comic studio in it's native Japan). 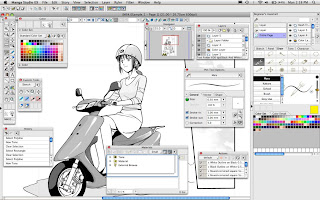 This iteration of the software is a one stop shop for anyone wanting to do a comic. It has digital versions of every tool you will need to create page borders, letter, ink and color your comic. It allows you to pick different paper sizes which correspond to actual comic page sizes. Also it allows you to lay down screen tones digitally, so you can use all of the effects you see in today manga. Along with Manga Studio EX 4. I would like to recommend a book for anyone who has any interests in producing comics. The book is entitled. DRAWING WORDS&WRITING PICTURES by Jessica Able and Matt Madden. 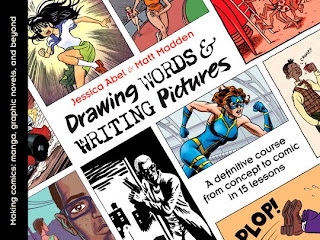 This book is very thorough in introducing, explaining and giving practical understanding concerning all of the different facets to comic book creation. I cannot talk about this book enough. If you are just exploring comics, graphic design or web design these softwares can be quite invaluable to your efforts. -Mark
Posted by Imaginos Workshop at 10:19 AM 1 comments